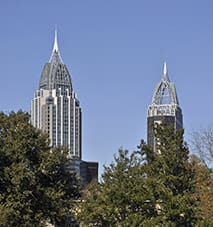 John’s 45 years of handling civil matters has taken him nationally into more than 16 states. He has handled hundreds of civil cases involving litigant’s rights in personal injury and property losses. Court rooms across the country are “second home” to John.

John’s personal interests are diverse. He is an avid University of Alabama football fan. He is an experienced, instrument-rated pilot, having earned ratings in single and twin engine aircraft, seaplane and rotorcraft. He enjoys mountain flying in the west, bush flying, and hunting and fishing in Alaska.  Other interests include boating and shrimping on his shrimp boat along the waters of the Gulf Coast. John enjoys an occasional project operating heavy construction equipment. He built and maintains his private State and Federally-registered private airport, Richardson Field (26AL), located in Mobile, AL. Spending time with his wife, Linda, their 4 children and 7 grandchildren, family and friends are his primary focus when he is not traveling on cases.

Please visit our Contact page if you have any questions.